Kawasaki Kisen Kaisha, Ltd. ("K" Line) via its European subsidiary company possesses 50% share of SAL Group in 2007, which engages in heavy lift transportation headquartered in Germany, and 2 executive officers were dispatched from "K" Line to work with the 3 existing partners. "K" Line has reached a basic agreement with joint venture partners on purchasing all (in total 50%) of the shares of SAL Group at the end of June 2011. With this transaction, "K" Line will become 100% owner of SAL Group.

With the current economic rebound, heavy lifter business is considered an essential tool for the development of big projects such as those in the oil and gas industry, which is expected to grow even further. Particularly, 2 most-advanced vessels having the largest lifting capacity in the world of 2,000 tons and equipped with DP (Dynamic Positioning System) were delivered in December 2010 and March 2011. These vessels are equally as suited to service-demanding offshore projects within the oil and gas industry as they are in assisting in the installation of foundations for offshore wind parks. By further building up in this field, "K" Line will create a new synergy with offshore support vessel and drill ship business department. "K" Line concluded to make this purchase because acquiring 100% share of SAL Group was considered a favorable opportunity for the build-up of Heavy Lifter Business, which, by taking advantage of "K" Line's extensive worldwide network, will result in a synergy that is in line with "K" Line's corporate policy to increase the ratio of its non-container business sector.

After acquiring 100% ownership of SAL, "K" Line expects to keep the trading name of SAL, location of head office and employment of all current staff; especially "K" Line would like current staff to continuously play an important role in SAL. Mr. Lars Rolner, who is one of the existing partners, will remain as CEO after the sale of his share.

SAL Group was founded by the Heinrich Family, its company history going back to 1865 when first vessel SS "Amoenitas" built by Sietas Shipyard in Germany came into the world. SAL has a staff of almost 120 onshore, and about 100 German and 400 Philippines crew members on vessels worldwide. The SAL Group of companies provides a large array of services including sales/project management, vessel operation and ship management engineering and crewing. SAL possesses and operates 16 heavy lift carriers which have lifting capacity of 600 - 2,000 tons offering 20-knot navigation speed, fastest in the heavy lift industry. And SAL is also the first heavy lift specialist to be certified for HSE (OHASAS18001 and ISO14001), as well as having an environmental passport and meets all highest environmental standards. Its high- spec fleet and highly-skilled officers and crews have an excellent reputation in the market. 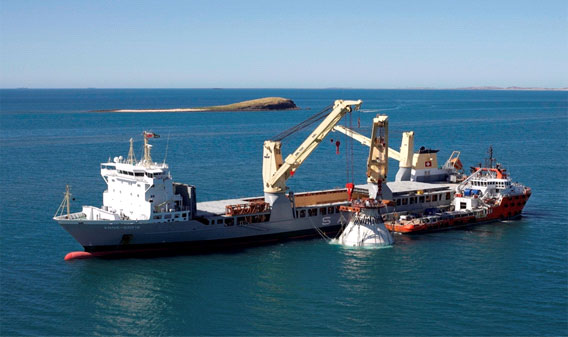