NOx TierⅢ regulations, effective Jan 1st 2016, in MARPOL Annex VI obligate us to reduce NOx emissions in ECA (Emission Control Area) by more than 80% compared with TierⅠRegulations. One of the measures technologies is Selective Catalytic Reduction (SCR), so Research and Development regarding SCR is being conducted in various fields.

SCR System has been equipped on small coastal ships in Northern Europe, and used at land-based plants. However, there is no previous example of being introduced for large ocean-going ships. So, we have to confirm achievement of  NOx TierⅢ Regulations and solve several problems by conducting actual ship onboard  tests.

Therefore we decided to install this SCR System for Diesel Generator Engine and carry out operational testing on “HANOI BRIDGE” which is a large container vessel (8600TEU) and will be delivered on March 26th ,2013.
Now SCR System has been installed in this vessel, and we have confirmed this system fulfill the appropriate specification during Sea trials etc.

We will measure the effect of SCR System and verify whether a problem exists during the one and half years after this vessel is delivered. 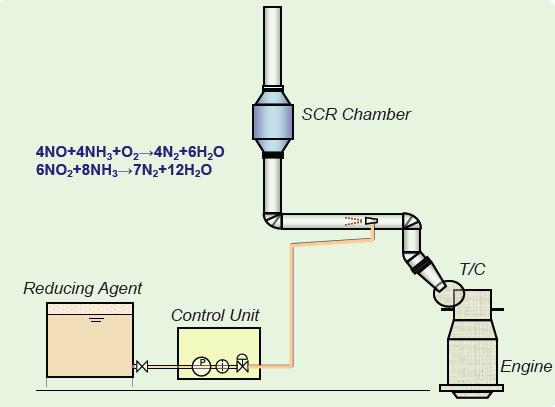