Enhancement of Container Terminal in Tacoma

Enhancement of Container Terminal in Tacoma

International Transportation Service, Inc. (ITS), a subsidiary of "K" Line, has been operating container terminals in Ports of Long Beach, CA, and Tacoma, WA and providing high quality services to customers through major shipping lines, including "K" Line, which call at its terminals along the U.S. West Coast.

Having established its container terminal in Tacoma named HUSKY Terminal in 1983, ITS recently reached an agreement in principle with Northwest Seaport Alliance (NWSA) covering major terms with respect to future rebuilding and reconfiguration of HUSKY Terminal. According to this agreement, the expansion will be completed by July 2018. The extensive enhancement being planned will provide Husky Terminal with approximately 420,000 sqm (104 acres) of leased and preferential berthing area in this major gate port in the U.S. Pacific Northwest. NWSA has additionally agreed with ITS to place an order for four of the largest and most modern gantry cranes to be installed at the new and innovative HUSKY Terminal. Through this ambitious future expansion, the newly-designed HUSKY Terminal will be upgraded to a container terminal capable of simultaneously accommodating two 18,000 TEU mega-containership vessels.

ITS, as one of the major container terminal operators along the U.S. West Coast, will continue in its dedicated commitment of providing high level and top quality services to shipping lines, including "K" Line, and their customers in anticipation of continued growth of future market demand.

<Outline of HUSKY Terminal in Tacoma> 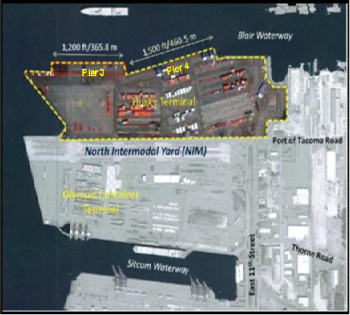 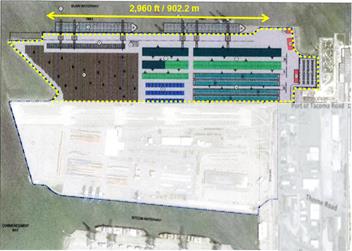