She is a Very Large Ore Carrier to carry cargoes dedicated for loading at Brazil and unloading in Japan for Nippon Steel Corporation. Linking the deep draft berth of Nippon Steel Corporation at the Port of Oita and major Brazilian ports by putting a very large vessel in service on the shuttle run will make it possible to achieve efficient transportation. The vessel is of the so-called "Unimax Ore", the revolutionary 300,000 dwt type ore carrier that has the versatility to enter major iron ore loading ports in Western Australia, while focusing on very deep water ports in Brazil, one of the largest places of iron ore exporting.

The most advanced technology had been applied to construction of the vessel, in order to ensure that she would satisfy our customers' needs. For example, each cargo hold is equipped with the world's largest single panel hatch cover so as to enable efficient cargo handling. She is also equipped with energy saving devices developed by Universal Shipbuilding Corporation, thus enabling dramatically improved propulsive performance and fuel consumption. The vessel, constructed to fly the Japanese flag and christened "Toyokuni" - a real Japanese name associated with Oita -, is expected to play a part in the initiative to improve the education and training system for Japanese seafarers, thereby contributing to further development of the Japanese shipping industry.

The vessel is the largest ore carrier ever devoted by "K" Line to Nippon Steel Corporation. "K" Line has also been awarded several long-term contracts by Nippon Steel Corporation for shipment of cargo by dry bulkers of 200,000-dwt, 180,000-dwt and 100,000-dwt classes. With a large number of vessels from various types with various sizes - from very large to small -, "K" Line offers its Japanese and international customers a unique range of transport services. "K" Line will remain committed to flexibly and actively responding diversifying needs for shipments of ore and other iron-bearing raw materials. 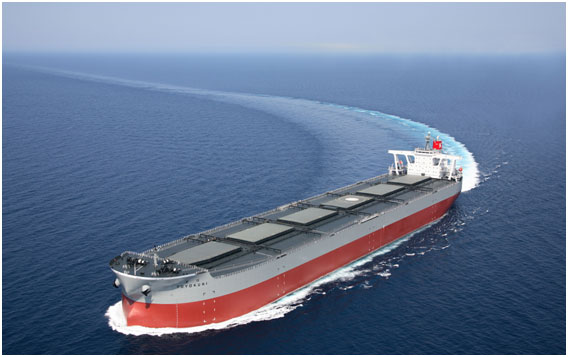