Tokyo, January 12, 2017 – For almost a year Kawasaki Kisen Kaisha, Ltd. (“K” Line), Mitsubishi Heavy Industries, Ltd. (MHI) and Mitsubishi Kakoki Kaisha, Ltd. (MKK) have been undertaking test operations aboard an actual ship of a newly-developed “Hybrid SOx Scrubber System” for removing sulfur oxides (SOx) from the exhaust gas emitted by marine diesel engines. The testing results have now verified that the system’s effectiveness in curbing emissions of air pollutants complies with international regulations, and the system has been officially approved by the Republic of Panama, the country where the test ship is registered.

The test unit of the Hybrid SOx Scrubber System is the first installation of a system jointly developed by MHI and MKK specifically for marine applications. It is installed on “K” Line’s “DRIVE GREEN HIGHWAY,” the large-scale car carrier with capacity for 7,500 –units 1. The system had been undergoing verification testing ever since the ship’s delivery in February 2016 and the test results mark the first time Nippon Kaiji Kyokai (Class NK) has satisfied international guidelines for exhaust gas cleaning systems 2.

In response, Panama approved that the “DRIVE GREEN HIGHWAY” is equipped with an exhaust gas cleaning system whose effectiveness has been substantiated, and on January 11 a certificate of compliance, the first awarded to a Panamanian ship as Japanese SOx Scrubber System, was conferred at the Embassy of Panama in Tokyo. The event has already been announced through the IMO website to its member nations.

At a meeting of IMO’s Marine Environment Protection Committee (MEPC) held in October 2016, a decision was reached to tighten regulations on the sulfur content of marine fuels in all waters of the world except designated “emission control areas” (ECA), from the current 3.5% limit to less than 0.5% starting January 1, 2020. Under the International Convention for the Prevention of Pollution from Ships (MARPOL), state parties to the convention are allowed, in lieu of using marine oil with sulfur content below 0.5%, to use marine fuel with a sulfur density of 3.5% on ships that are equipped with systems of equivalent efficiency as confirmed by the supervisory authority of the party to the convention.

The Hybrid SOx Scrubber System is the first commercialized system in Japan to comply with the more stringent SOx emission regulations that took effect, starting with ECAs, in 2015. The system has two modes: an “open-loop” mode in which seawater intake is sprayed directly on the exhaust gas; and a “closed-loop” mode in which fresh water is used as the cleaning water, and after the exhaust gas is cleaned, it is then neutralized using sodium hydroxide (NaOH), after which water is then sprayed on the exhaust gas again. This hybrid system enables stable cleaning unaffected by the properties of the seawater in the area of navigation.

Whereas equipment auxiliary to engines is normally installed within a ship, the core components of the Hybrid SOx Scrubber System can be contained in an ISO shipping container. This modular packaging means that the major system components can be installed on an open deck, for example, thereby not only allowing the space within the ship to be used efficiently but also helping to reduce installation time. Also, as the container package is relatively easy to remove and transfer to a different vessel, installation on aging ships is facilitated.

Notes
1. The project to install and test the Hybrid SOx Scrubber System on the DRIVE GREEN HIGHWAY is a joint study undertaken by ClassNK, “K” Line, Japan Marine United Corporation, MHI and MKK. It was realized with support from ClassNK’s “Joint R&D for Industry” program.

2. The guidelines referred to are IMO MEPC.259(68): “2015 Guidelines for Exhaust Gas Cleaning Systems.” They require that exhaust gas cleaning systems meet fuel-oil sulfur content regulations equivalent to those delineated in MARPOL Annex VI regulations 14.1 and 14.4. The guidelines were adopted at the 68th session of the MEPC in 2015. 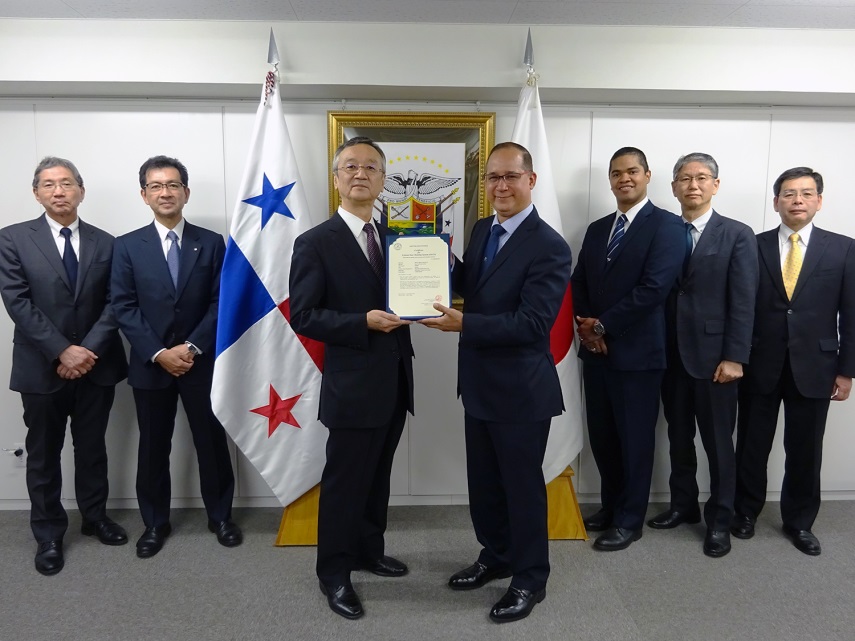