An emergency response drill was performed on the 27th February 2012 to ensure preparedness of optimum response towards any major maritime accidents that resulted in large-scale oil spill with human casualty.

The scenario of the drill evolve as “K” Line VLCC “FUJIKAWA” collides with a general cargo ship off the coast of Cape Sata of the Ohsumi Peninsula in Kagoshima Prefecture,when she was heading towards Kiire, resulting in huge oil spill through the damage portion of port side cargo & ballast tank of “FUJIKAWA” and causing physical injury to a crew member of general cargo ship.

At the end of the drill, a mock press conference was held as a part of the complete drill proceedings. “K” Line’s President Asakura, Vice President Saeki, Managing Executive Officer Sasaki together with Ship Management Company’s (KLSM) Managing Executive Officer, Sakurai and the head of QC group Fukuda were attended in the Q&A session of press briefing. Many questions were raised to them by the attended dignitaries and staffs that make the event more realistic and momentous.

Conducting such exercise on regular basis, we remind ourselves again to be fully prepared on the contingency plan to deal with "large-scale accident response ". In order to nurture safety culture in K line group as a whole, the importance to hold such event was found be very meaningful for raising safety awareness and similar program like “Winter Safety Environment Protection Campaign” and the regular vessel visit by executive officers are plying vital role to improve safety consciousness onboard and ashore. 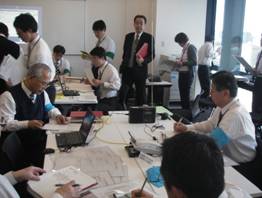 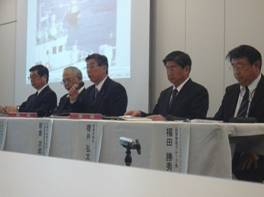