The Port of Los Angeles commended top ocean carriers in compliance with the VSR (Vessel Speed Reduction) program in designated coastal zone for the purpose of reducing exhaust gas from their vessels in 2012.
On 13th Jun 2013, Kawasaki Kisen Kaisha, Ltd. ("K" Line) received the award from the Port of Los Angeles based on its total of 31 ships, representing 59 qualifying legs into and out of the port, meeting 100% compliance rate within 40 nautical miles from the port during 2012.
The vessels speed reduction is effective for reducing emissions of diesel particular matter (PM), sulfur oxides (SOx), nitrogen oxides (NOx) and greenhouse gases such as carbon dioxide (CO2) by decrease of a fuel consumption rate.

The "K" Line Group is making every possible effort to successfully implement its own environmental program, as well as cooperate with any other environmental preservation objectives being introduced by other concerned parties around the world, and will continue to actively contribute to protection of the global environment. 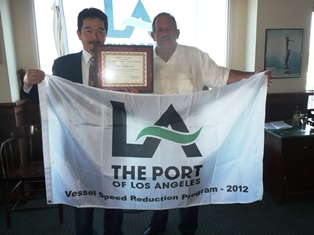